A good award booking trick to learn is the use of a positioning flight. Typically the best award availability is found from a carrier’s hub city. Since I am not located close to any large hubs booking a separate inexpensive positioning flight to get me to the hub has become a common practice. I utilized this strategy when booking my outbound trip to London.

In this case, to secure my Virgin Atlantic Upper Class tickets at the lowest possible mileage rate I need to book directly from JFK to LHR. I just needed to find a cheap flight to get me from near my home to JFK. Also I was flying out of Terminal 4 on Virgin Atlantic I wanted to limit my options to Delta since they also operate from Terminal 4 and I would avoid having to re-clear security coming from another terminal.

Using Google Flights I tracked prices and found an inexpensive one-way ticket on Delta that would get me to JFK Terminal 4 with an extended layover before my overnight flight on Virgin Atlantic.

Google Flights pointed me to Delta where I could find my booking options. Since I was already flying international business class later that day I felt that starting my trip off in economy would be a bit of a let down. Even though it was a short flight on a regional jet first class only had a $50 premium over regular economy. I felt that booking First Class was a good value, particularly on the CRJ-900 which has a comfortable 1-2 seating configuration in first class.

To help offset the cash price of the ticket I was able to leverage credits from my new Delta Amex Gold card along with gift cards purchased with my regular Amex Gold card that utilized the annual airline fee credit. This brought the cost of the ticket down to $22 out of pocket. Not bad for a quick flight in domestic first class. 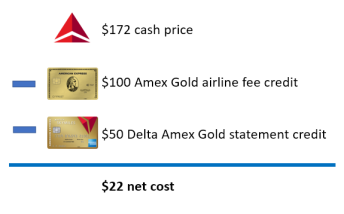 I was flying first class in a CRJ-900 regional jet so my expectations were not that high. The nice feature of the CRJ-900 is it’s small first class cabin which contains 12 seats in a 1-2 configuration. Since I was travelling alone I was most looking forward to sitting on the port side of the aircraft which had the single seats. Per Sea Guru’s recommendation, I chose seat 4A which is the only row in the first class cabin which did not have misaligned windows.

My seat was a standard recliner seat and it had an extremely thin blanket and pillow along with a small bottle of water waiting for me when I boarded.

My seat had a comfortable 19.6 inch width and 37 inches of pitch between rows. This was very nice for the 1 hour flight across New York state.

Shortly after I boarded I was offered a pre-departure beverage. I ordered a rum and coke. Once airborne a standard variety of snacks were offered from a basket served by a flight attendant. These snacks were satisfying but nothing terribly impressive so I neglected to grab a picture. 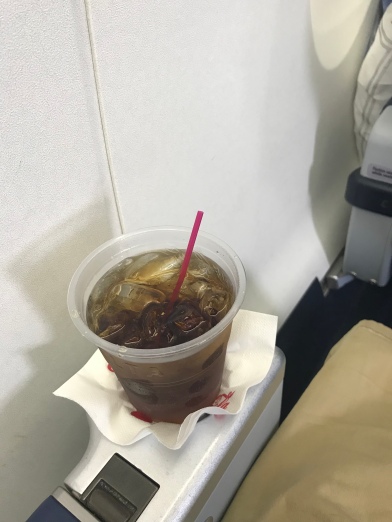 Nice feature of the updated CRJ-900 cabin is much larger overhead bins compared to those on smaller regional jets like the CRJ-200 or ERJ-145. I could easily fit my eBags Mother Lode Weekender Junior in the overhead compartment opposite my seat.

Also on the port side of the first class cabin are small lockers that could be convenient for fitting light jacket or small bag.

After a smooth ride into JFK for an on-time arrival I deplaned and went to my first stop of the layover at the Delta Sky Club in Terminal 4.

Domestic first on a regional jet is nothing to brag about for a comfortable ride on a short flight it does the job. I would never pay an absorbent amount of cash or miles for such a domestic first trip. For only a $50 premium which actually turned out to be a net $22 out of pocket it was a pretty good value and an easy way to start my transatlantic journey in business class.

View all posts by Mike Z